Last week, I had the privilege of speaking with Chris Vos from the blues/rock band, The Record Company who will be playing at the UB Center for the Arts this Sunday, November 23rd. Having only been a band for two years, this trio from Los Angeles, CA has played with the likes of B.B. King, Buddy Guy, Black Joe Lewis and, my absolute favorite, Charles Bradley.  Their songs have been featured in primetime shows like Grey’s Anatomy, Nashville, CSI: Crime Scene Investigation and in over 25 TV commercials.

The Record Company is notorious for putting on amazing live performances and in just a few moments of speaking with Chris, it became very clear why; passion and authenticity. 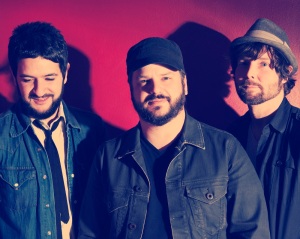 I love that when you three came together as a band, you jammed out in your backyard for fun. Are you able to articulate that chemistry? What’s at the heart of the Record Company that makes you so unique?

Well, I think each us come at it with different angles. We love the music we’re playing because we share the same influences. We care very deeply about each other and the music we’re playing. Playing live is about having a conversation with each other. There’s an instant understanding. We need to play what we play. It’s something we need to do.  There’s no choice in the matter. We went to school and graduated college but we need to play music.

You only get so many times to play in your life [in front of an audience]. It’s a finite number. It doesn’t last.  I know it may sound corny but when I go on stage I can’t help but think to myself, “one last time.” We go into every show with as much passion every time. You never know how many times you get to do that. The audience deserves the best and should see that we care. You can’t waste anybody’s time. Ours and the audience’s. We want to come from a deeper level just like our heroes. What really brought us together are the blues musicians; listening to John Lee Hooker, Jimmy Reed, Muddy Waters….

The Superdead EP (2012) seems a little more mellow/darker than the Feels So Good EP (2013) which seems more modern and upbeat. Can you explain the evolution of your sound between these two EP’s?

Rock & Roll.  We care much more about the roll than the rock. We don’t ever approach anything with a feeling in mind. If something feels good then we just go with it…it just kind of happens.

Quit teasing us with the EP’s. Can we start getting excited for an album in 2015?

Within a year, I think you could be seeing something.

You guys are known for putting on a great show. What’s your special sauce?

You don’t want to sound like anyone else…ever. You should never imitate anyone. We play from an honest place and use our own sounds to inspire our music.

When we’re up on stage we put everything forward, everything we have. We don’t play the same way every night. We adjust. A feeling of a song will be different from night to night. We all go into every show with the respect that we don’t want to waste anyone’s time. We want to throw down a song as hard as we can and make people feel something. We try and connect with the audience and make it more of a revival environment.

Normally, it’s a brief moment where we put our energy together and each say a little something that reminds us that once, we were just three guys who hung up microphones in our bass player’s living room recording music.  We’re thankful to be where we are right now.

What’s on your playlist right now? Have you discovered an old artist lately you’ve never heard of? New artist?

Older music: Mitch Ryder and the Detroit Wheels from the 60s. Wynonie Harris from the late 40s. I love “Let’s Get Rocking Tonight” and “Shake That Thing.”

If you could go back in time and jam out with any artist/band in your backyard like the Record Company first had when getting together, who would it be?

Indie music blog based in Buffalo, NY
View all posts by Buffalo Heard →
This entry was posted in Interviews & Show Reviews and tagged blues, rock, The Record Company. Bookmark the permalink.